This Australian pilot, Squadron Leader William Joseph Hickey, served with 3 Squadron from 1929 to 1931, early in his career.
He was killed in action whilst serving with 80 Squadron RAF, on the day following the outstanding act of bravery described below...

Below are extracts from the radio talk by an RAF Officer of the Middle East Command.  It is the eighth in the series "This Was Their Hour", broadcast on May 28, 1942...

THE RAF IN GREECE

Historians will have to decide on the merits and failings of the campaign in Greece and now is no time to pass judgment on the six months' struggle which began when the gallant Greeks threw back the Italians in the snow and ice-bound mountains of the north and which came to its end with a repetition, although on a smaller scale, of the drama of the beaches and sand-dunes of Dunkirk.  My purpose in referring to the Battle of Greece is to tell you of a few of the many deeds of valour performed there by Royal Air Force personnel who, from the very beginning of hostilities, were fighting day-in and day-out at the side of our Greek allies.

I could devote half a dozen of these talks to acts of gallantry by RAF personnel in the numerous operations that were carried out.  It is not generally realised that, in establishing itself so readily in Greece, the RAF came face-to-face with two enemies.  There were the hostile troops and aircraft and there was also the weather which, in the mountainous country, offered little towards successful air operations.  The Royal Air Force went into action just as weather conditions were becoming bad and fought on unceasingly throughout the hard winter.  By a cruel chance of fortune, just as flying conditions were improving, the land forces of both sides became locked in decisive conflict and withdrawal became necessary.

To my mind, no-one could fail to be thrilled by the heroism shown by an Australian pilot, Squadron Leader William Joseph Hickey, who was killed in action on the day following an outstanding act of bravery.

During December 1940, when the fighting on the northern front was particularly fierce, Squadron Leader Hickey was leading a detachment of aircraft on patrol, when they came across a formation of some ten Italian fighters and bombers.  During the air battle that followed, one member of the squadron - "Sammy" Cooper, had to bale out after being severely wounded.  On his way down, this officer was being machine gunned by Italian aircraft and Squadron Leader Hickey, seeing what was taking place, immediately began to circle round and round in the vicinity of his colleague, in order to attract the attention of Greek troops on the ground.  At the same time he was able to keep at bay the Italian aircraft which were making repeated and determined attacks on the helpless man descending by parachute.

When Cooper had landed near a Greek advanced post, which was itself under heavy shell fire, Squadron Leader Hickey made off to find assistance.  He made a successful landing in a field near Argyrocastron, which was then only a short distance behind the front line, and immediately organised a relief party.  Having secured an ambulance, he drove back towards the mountain post near to which Cooper had come down.  Stopped eventually by an impassable river, Squadron Leader Hickey secured the loan of a horse, forded the stream and rode up to the Greek advanced post.  Greek soldiers constructed a wooden stretcher and, under the supervision of the Squadron Leader, the badly wounded pilot was carried for miles, over difficult mountainous country and frequently under fire from the Italians, back to the ambulance.

The ordeal was not, however, over.  The Squadron Leader drove Cooper back to Argyrocastron, but there, unfortunately, the Greeks had little medical equipment, no drugs and no anesthetics.  Undeterred by this unexpected set-back, the Squadron Leader had Cooper put back into the ambulance and began the drive to Yannina, where he knew that better facilities would be available.

Early next morning, still on the way to hospital, Cooper died and Squadron Leader Hickey, in spite of many hours of continued activity, returned to his squadron.  A few hours later he was again in action with the enemy and, in the course of this combat he himself had to bale out.

By a tragic repetition of events, the Squadron Leader came under fire from an Italian aircraft as he floated slowly down to the ground.  On landing he was found to be dead.

I need hardly tell you that the other members of the Squadron saw to it that the Italian pilot who had gunned the defenceless Squadron Leader was himself shot down in flames.

Hickey was a great type of Australian.  Seconded from the Royal Australian Air Force on a five year's attachment, under the pre-war scheme for the interchange of pilots, he had proved an outstanding success when given command of a squadron in the Middle East.  His concern for his pilots, which found so magnificent a climax in the heroic deed of which I've just told you, will long be remembered as one of the most gallant episodes of the war in Greece.

He had already been recommended for the Distinguished Flying Cross and it was subsequently awarded to him but he did not live to learn of this honour...

Editor's Note: Readers should be aware that the above wartime account contains some propaganda elements.  In particular, Hickey's full biography, on the excellent Håkan's Biplane Fighter Aces site, does not back up the RAF broadcaster's assertions that the Italians fired at parachuting pilots in these particular combats.  Hickey's parachute actually caught fire as he attempted to bale out of his stricken Gladiator.   In this combat on 21 December 1940, 80 Squadron claimed eight confirmed "kills", but in fact the Italians lost only two.  (This reflects the typical difficulty of assessing results in fighter-versus-fighter combat.)  The Italians in turn claimed nine confirmed "kills", but actually the British lost only two Gladiators, including SQNLDR Hickey. 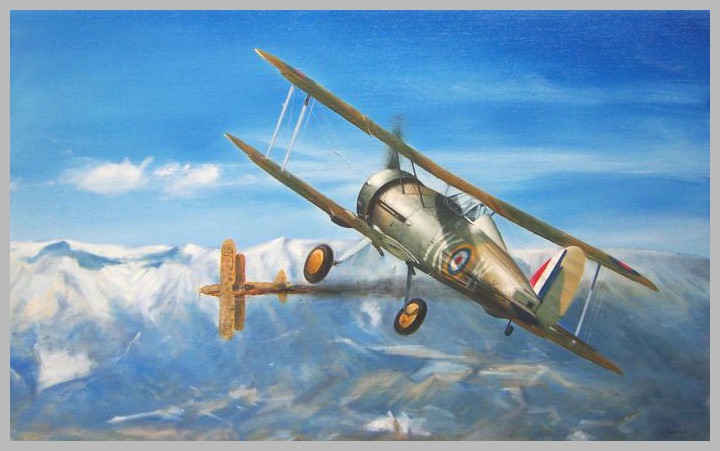 Painting of an 80 Squadron RAF Gladiator over Albania, December 1940, by Vladimir Urbanek

CAIRO, Jan. 17. A communiqué issued in Cairo last night announced that the Distinguished Flying Cross had been posthumously conferred on Squadron Leader William Joseph Hickey, an Australian who was killed in action in Greece.  The communiqué stated:

Squadron Leader Hickey was seconded from the Royal Australian Air Force to the Royal Air Force for a five years' attachment and was given command of a squadron in the Middle East last August.  He was an outstanding success as leader, and his squadron, which was moved to Greece only two months ago, has since accounted in battle for 42 enemy aircraft. Only three pilots, including Squadron-Leader Hickey, have been lost.  Squadron-Leader Hickey had consistently displayed great courage and remarkable leadership...

Squadron-Leader Hickey spent a long time in a Sydney aircraft workshop trying again and again to enlist in the R.A.A.F. before he was old enough.  Finally he succeeded...

...Hickey was killed in action in Greece on December 21.  He had been given command of a squadron in the Middle East in August.  Requiem Mass for the repose of his soul was celebrated at St. Francis', Paddington, last week.  Squadron-Leader Hickey was an old boy of St. Aloysius' College, Milsons Point.  After matriculating there he studied engineering for three years at Sydney University. Later he became a [voluntary] aircraftsman in the Citizen Air Force with No. 3 Squadron at Richmond NSW.  [Hickey then was then accepted by the RAAF for training as a Pilot Officer with 3SQN at Richmond.  He later transferred to the RAF, initially for five years, but eventually elected to stay permanently.]  He joined the R.A.F. in May, 1931...   He was the son of the late A. E. Hickey and Mrs. Hickey, Lang Road, Centennial Park.

...Michael Hickey, the elder of his two sons, was just three years old at the time.

His father's body was never recovered, the grave never found.

...Perversely, it is only in a remote village in Albania that the legend of Squadron Leader William Hickey lives on.   In July 2006 Michael Hickey had travelled there with his now wife Michaela in search of his father's gravesite, to fulfil a promise to his mother.

Armed with the letters of his former Squadron Leader, a guide, a translator and the knowledge only that his dad had died somewhere in the valleys around Gjirokaster, Michael Hickey scoured the local farms until he was introduced to an old farmer who had not only witnessed the dogfight as a young boy, he'd been with the villagers who found his father -- alive, if only just.

"I melted.  Just melted.  We both had tears running down our cheeks," recalls Hickey, who yesterday joined his local Anzac Day march in Ballina, northern NSW, wearing his father's DFC.

"Dad had survived for two hours before he died.  And this farmer, he asked me if I had a photo of my father, which I did, and when I showed it to him he said, `That's the man I buried.'